About the Manitoba AAA U-18 Hockey League 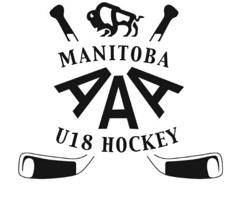 The objective of the Manitoba U18 AAA Hockey League is (a) to encourage and foster U18 AAA hockey and (b) to promote and encourage the formation of U18 AAA Hockey in Manitoba.
Team composition
Each team must consist exclusively of players from their designated region with the exception of a player who remains unsigned on October 1st of any given year. In such a case, the unsigned player may try-out for, or be signed by, any other team. Note: a player who refuses to sign is not eligible to transfer to another region. In the case of a 15 year old player who remains unsigned on October 1st, the same transfer rule applies with the exception that, as a 16 year old player he must return to his original region until/unless released in that year.
According to league by-law 8, no bantam-aged player will be allowed to participate in the Manitoba U18 AAA Hockey League as a registered player or as an affiliate player.
Schedule & Playoffs
Each member club plays a balanced 44 game schedule: each club plays every other club four (4) times, twice at each teams home region. The top eight (8) teams, according to points obtained, qualify for the play-offs. The highest seeded team will play a five (5) game series against the lowest seeded team and the second highest seeded team will play a five (5) game series against the second lowest seeded team, etc., etc. This format will be used to determine all four (4) first round, two (2) second round, and the final round match-up(s), as per the league by-laws.

You could win VIP tickets to the 2022 Premier League Mornings Live Fan Fest in Philly!HOW TO ENTER